I frequently deny that it’s all about the winning, purely because I spend a lot of time not winning.

Because in any competition there can only be one winner – so that means for every one winner there are many non-winners. I have been very good being a non winner. I have tried not to be grumpy about being a non-winner.  Despite the fact I am indeed very grumpy.

Since the beginning of last September I have not won the Great North Bike ride.

Not won the Great North run (although I knocked 10 mins off my time – and yes – there was still a queue for the toilet).

Not won the Kielder Run, Bike, Run (I did the first running bit!).

So I was thrilled when this arrived. 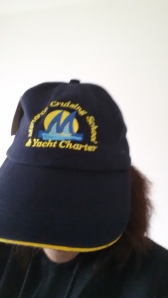 Because I had won something! A ‘name that bay’ competition by Menorca Cruising and I got a hat.  To be fair I had REALLY tried to win – going to Menorca about 47 times has finally paid off.  And it has proved to be a lucky hat… When I went sailing the Sunday after, I finished two races – coming third and second (and yes there were more than three boats on the water!). It was the influence of the hat.

In fact it is now feeling so lucky I may have to wear all of the time.  It’s even making me want to do big boat sailing in Menorca – when what we usually do is this.

Making me win is a genius marketing ploy.  I think now I might want a go in this.

As everyone likes to win, in my next post I will also be sharing who the winners of the boat naming competition are – and an update on the knitting prizes!